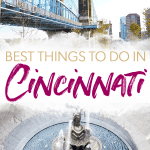 Cincinnati has just about everything you could possibly ask for in a city – great museums, great food, sports, cultural events, history, and everything is affordable. It’s probably not the first city people put on their bucket list, but there are so many fantastic things to do in Cincinnati it should definitely be on the list. It’s also a great place for adults to explore and have a few tasty drinks, so whether you’re in town for a trip or you’re just trying to find some things to do this weekend there’s plenty of new things to try and unique places to go.

Cincinnati Museum Center – It’s called center for a reason because this building is actually three museums in one – a natural history museum and science center, a children’s museum and a history museum. The enormous building is split up into three sections. It also contains an IMAX theater and almost always has a large traveling blockbuster exhibit – think dinosaurs, egypt, rome, etc.  The building is an old art deco train station, and you feel like you’re being swept back into history the moment you stand in the gigantic rotunda. There are also tours of the old rail rooms and the architecture of the building. It’s currently under construction getting some much needed TLC on its historic bones, so make sure you check the website before you head over for a visit.

Cincinnati Art Museum – the art museum contains over 60,000 works of art spanning thousands of years and contains works by Botticelli, Renoir, Monet and Picasso. It’s situated in a beautiful park and is a great place to spend an afternoon relaxing.

National Underground Railroad Freedom Center – Cincinnati was one of the main routes on the underground railroad for slaves trying to escape to freedom in the northern states. The Freedom Center takes a look at this painful past and the individuals that helped make the railroad possible. The museum also has exhibits that examine modern day slavery and human trafficking.

Newport Aquarium – Technically across the river in Kentucky, the aquarium is well worth the trip. More for the adults that are kids at heart as the place is frequently overrun with children exploring the deep blue, the exhibits still have plenty of interesting and educational information for adults. The aquarium boasts thousands of fish from ecosystems around the world and is famous for its glass topped tunnels and floors, where visitors can feel like they’re submerged alongside sharks. They also have penguins and an albino aligator!

There are a laundry list of venues in the Cincinnati area to choose from if you’re looking for a place to catch a show. Check the venues’ websites for acts that might be in town while you’re visiting:

Thanks to its German heritage, Cincinnati also has a massive Oktoberfest celebration known as Oktoberfest Zinzinnati – the biggest outside of Munich to be exact. If you’re planning to visit in late September, you should definitely fit it in to your itinerary. It has delicious food and lots of live music and entertainment. It even includes the “Running of the Wieners”, an all-dachsund dog race through the streets.

Cincinnati Chili – take your pick of Skyline or Gold Star. They’re similar, but if you’re asking me I will tell you Skyline all the way. The chili is unique in that its probably nothing like chili you’ve had in the past because it’s flavored with cinnamon and chocolate among other unique spices. It looks seriously underwhelming, but I promise what it loses in looks it makes up for in flavor.

Montgomery Inn BBQ – this restaurant is a mainstay for locals and makes some of the best BBQ and BBQ sauce around. The original restaurant also has a cozy atmosphere and is worth making a stop. Just make sure you get there early, as lines on the weekend are not uncommon. There’s also the Boathouse which is located down on the river and serves the same great food with a sports lounge in case you’d like to have BBQ and a game. The views of the river aren’t bad either.

Rheingeist Brewery – Thanks to its German heritage and the microbrewery craze that’s been sweeping the US for several years now, Cincinnati has also been putting out some of the best craft beer you could ask for. Rheingeist is amongst the best in the city, and I highly recommend it. You can either have a beer in the tap room or on the roof (weather permitting) or you can book a tour of the facility to learn more about how they brew their beer.

Moerlein Lager House – Another hat tip to Cincinnati’s past, this restaurant features craft beer and food offerings that Cincinnati’s Germans could be proud of. While the restaurant is newer, Moerlein’s history goes all the way back to the mid-19th century when German immigrants began settling in Cincinnati, so you can consider sipping the beer here to also be getting a taste of Cincinnati’s history as well.

Cincinnati is a sports city. No matter how many times the teams win or lose, Cincinnatians stick by them with the kind of pride and dedication you don’t often see. Getting to know Cincinnati means getting to know its sports culture, and if you don’t like sports – you can at least enjoy some of the awesome pub style food that has popped up around it.

Cincinnati Reds – The Cincinnati Reds were one of the charter teams of the National League all the way back in 1882. It’s safe to say that baseball is an important part of Cincinnati’s heritage. The best way to experience the stadium is to catch a game during the summer, but if you’re visiting in the off season you can still take a tour of the stadium or visit the Hall of Fame Museum.

Cincinnati Bengals – While the Bengals have a long reputation of losing playoff games and having trouble on and off the field, the team is still a beloved mainstay of Cincinnati. Every Sunday you’ll see a swarm of fans surrounding the stadium decked out in black and orange, chanting WhoDey! while they tailgate. If you like your football games a little rough and tumble, catch one of the rivalry games between Cincinnati and Pittsburgh or the Battle of Ohio when they play Cleveland. If you’re afraid of heights, try to avoid the escalator to the sky (or hope on it for some beautiful photo opportunities of the river front).  If you can’t make a game, you can still tour the stadium and catch some delicious sports bar food at the surrounding restaurants.

Tags: things to do in, Travel Guide