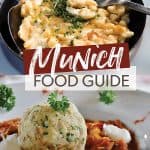 Munich is one of the best places to enjoy food in the world, and the center of all things Bavarian food: the beer, the bread, the pork, the potatoes, and the sweets – so so many delicious sweets! If you’re a foodie, and you haven’t had Munich on the list before you might change you mind!

One of my favorite things about it is that you don’t even have to go to a fancy restaurant, or even leave the train station to get some delicious Bavarian food. Müncheners are just that good! 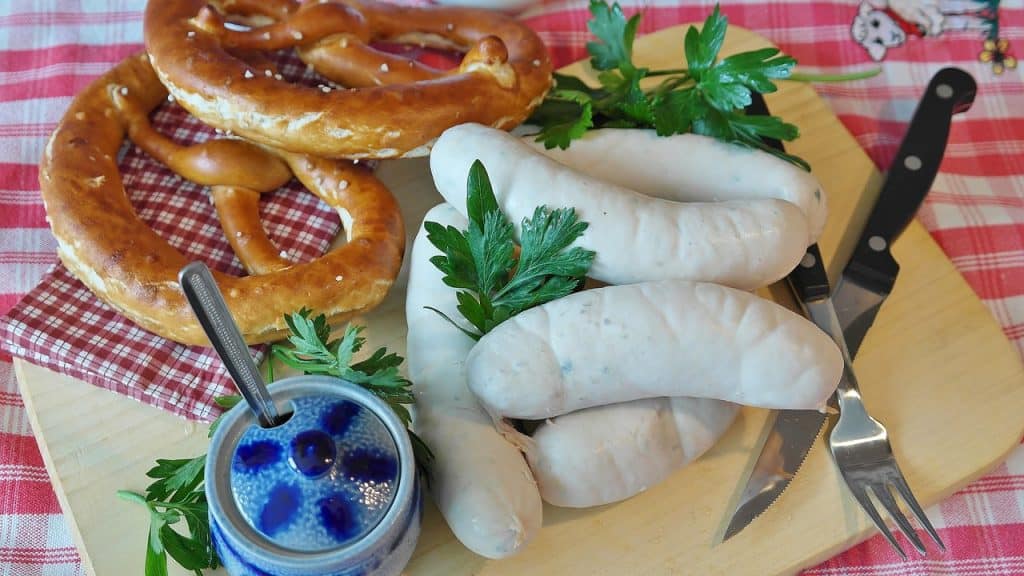 Weisswurst is a traditional Bavarian sausage that is consumed between breakfast and lunch, usually with a pretzel and often with beer.  Weisswurst traditionally has no preservatives and thus needed to be eaten in the early hours in order to avoid spoiling. Despite inventions like refrigerators, Weisswurst is still consumed as part of the morning ritual in Munich. It is served in a small pot of hot water, typically with a side of German sweet mustard. Notably the skin of weisswurst is not eaten, so remember to remove the casing before you begin eating! Oh and beer and weisswurst in the morning is a totally acceptable thing in Munich! You can grab both at the Augustiner-Keller!

It’s a little hard to pronounce, but if you get a cold or other illness while you’re traveling in Munich, make sure to order some griessknockerlsuppe. It’s a tried and true oma-approved recipe for fixing what ails you, just like chicken noodle soup is in the United States.  It features a warm broth with oblong shaped semolina dumplings that taste like magic when you aren’t feeling well. 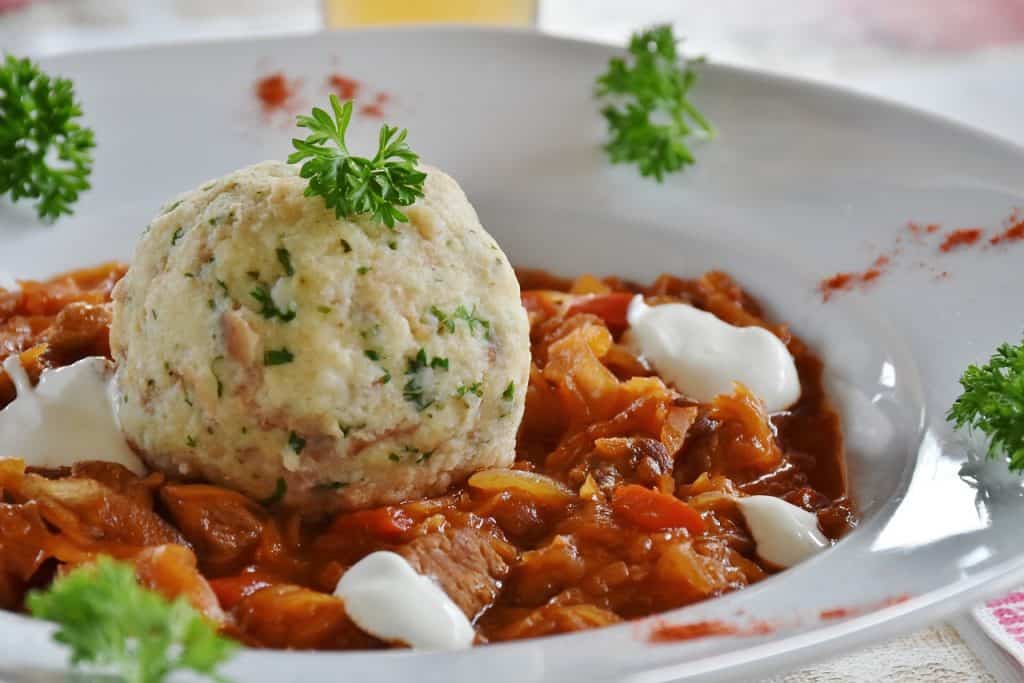 In fairness, the last time I had some before I left was on a day trip from Munich (rather than in the city). But in my defense, it was at a restaurant on an island in the middle of the lake in the alps that had been founded in the 1500s on a cold rainy day. The atmosphere might have played a part, but this is a food I have always loved and I’ve enjoyed it at plenty of Munich locations as well.

The German’s have their own twist on Hungarian goulash that still has the delicious smoky flavor of paprika at the heart of the dish. They also typically pair it with a semmelknoedel, a bread dumpling that will remind you of stuffing. It’s so incredibly hearty, and will keep you full enough to keep going on your adventures for the day. It’s on almost every menu of traditional German restaurants in Munich, so you have your choice of places to enjoy it.

Speaking of dumplings, you definitely should try knoedel while you’re in Munich. The traditional potato dumplings are often giant and paired with other Bavarian treats like schweinehaxe or rouladen. You can grab some at one of the more infamous spots in Munich like the Hofbräuhaus or you can opt to sample some at a local spot near your hotel.

This is the Bavarian version of mac n cheese, and it’s well worth every rich creamy bite. Spätzle , a type of noodle or mini-dumpling, is paired with copious amounts of cheese and onions and baked until there’s a crispy crust on top. As soon as you get back home, you’ll be searching for recipes to make your own version. That’s how good it is. 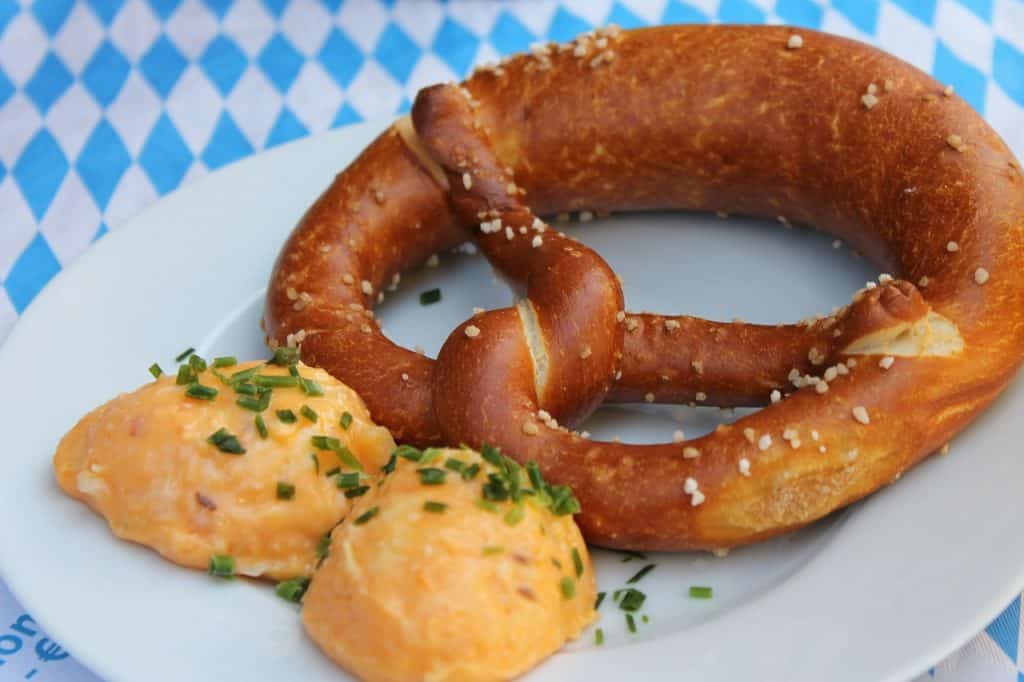 Obazda is a Bavarian cheese dip typically served in beer gardens in Munich. It’s often smeared on to a pretzel for extra goodness. It’s a mix of Camembert  or other soft cheese with butter and spices. (Just tell yourself you’re sampling real biergarten food for science, and forget about all the calories.) If you want a special experience you can grab a bite to eat at the Seehaus in the English Garden where you can people watch, take in the beauty of the Isar and take a lazy stroll through the park after eating! 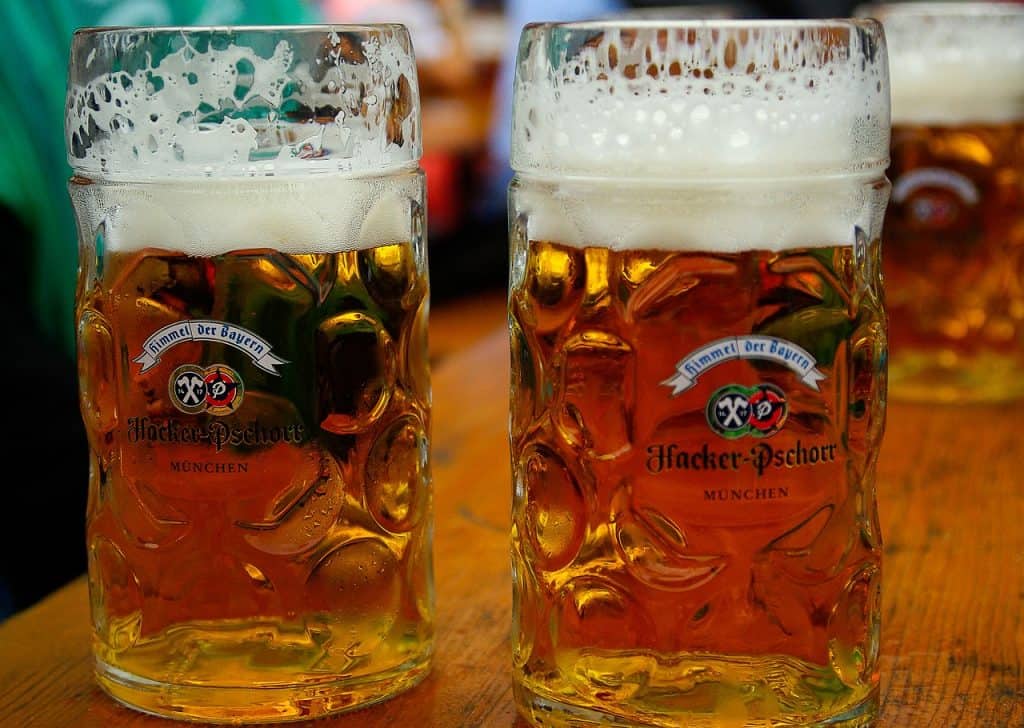 Munich first adopted the Reinheitsgebot or German Beer Purity Law in 1487, and it was expanded to all of Bavaria in 1516 when the kingdom was reunited. The law requires that beers brewed in the region can only contain water, barley and hops. This unique standard (and Oktoberfest) has helped make Munich beers famous. Munich breweries like Spaten and Paulaner all make beer according to the purity law, and many restaurants will advertise which kind of beer they carry.

Named after a bicycle rider, this drink mixes famous Munich beer with carbonated lemonade. It’s not for everyone, but it’s definitely a Munich specialty you should give a try!

Served in restaurants and in bottled form in almost every vending machine you’ll find, apfelschorle’s are uniquely refreshing. A mix of apple juice and carbonated water, it makes for a light and fresh drink to pair with all the heavy food you’ll be eating. If apple isn’t your favorite flavor you can can also find many other variations of fruit juice and fruit blend schorles – and even wine schorles!

You need to try pretzels in Munich. I know you probably think you know what pretzels taste like. You’ve had them before. Plenty of times. But trust me, until you have one in Munich you can’t really appreciate them. The giantness, the crisp exterior and the soft center, the hint of salt with every bite and getting to alternate your dipping between German sweet mustard and obatzda while sipping a cold Märzen beer? It’s a culinary and culture experience you need to have in Munich! 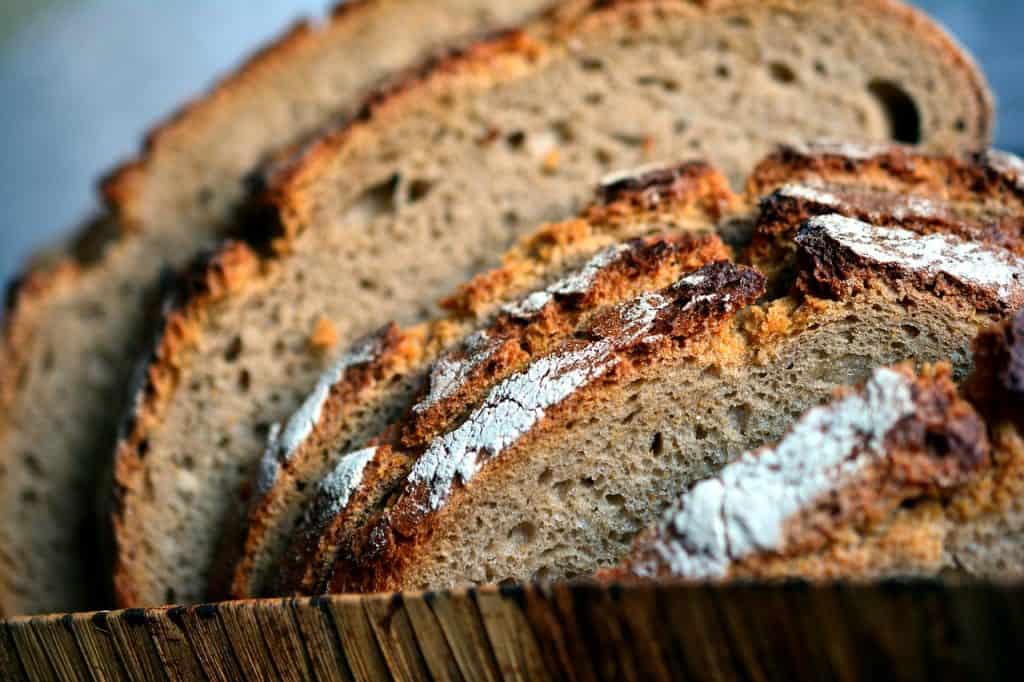 Semmels are delicious little bundles of white bread joy that are ubiquitous in Bavaria. They’re perfect for breakfast, for a sandwich or for eating alongside your currywurst. If your hotel doesn’t serve them at breakfast you can easily go down to the local bakery and grab a few. I had them every single morning for breakfast because they were that delicious.

If you’re looking for a bread beloved by local Bavarians, you need to find bauernbrot, a kind of Bavarian farmer’s bread. Just like semmels, it’s ubiquitous in the local bakeries. It typically comes in a loaf, and has delicious rye bread flavor. I had it frequently as part of a late lunch or early dinner alongside Bavarian farmer’s cheese and meats like ham, leberkase and the local’s favorite wurstsalat.

This yeasty sweet dough is formed into a bun and steamed in milk, and then covered in a sweet sauce, usually vanilla. It is unlike anything you’ve probably ever had and it is delicious. You can learn to make them at home, and honestly my great aunt’s are some of the best I’ve ever had. If you’re not lucky enough to have a German grandma to cook some up for you though, you can get a really delicious version at local Conditereis or ice cream shops. 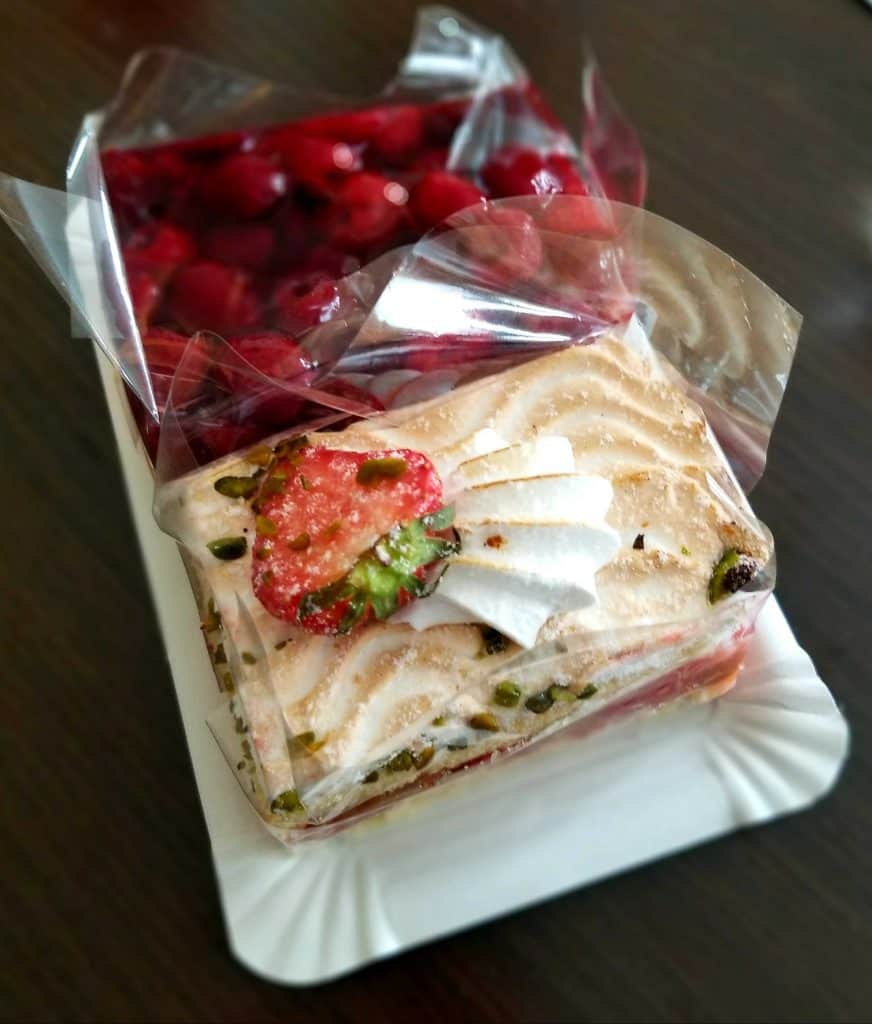 Listen, I can’t pick just one kind of cake for you to try over there. Cake is a cultural event in Munich. Served as a mid-afternoon mini meal with coffee and sometimes finished with schnapps. You can go to a local grocery store, bakery or Konditerei to pick up your own version. Everyone I know has their own favorite local shop but I found that even the bakeries in the train stations made amazing cake. They’re frequently piled into glass front cases that will allow you to pick with your stomach and your eyes.  There was at least one occasion where we just chose a few cakes and made a lunch out of sampling them. If you can’t find a local Konditerei you’re interested in, try finding a Rischart. They’re a local chain that’s all over the city and delicious! 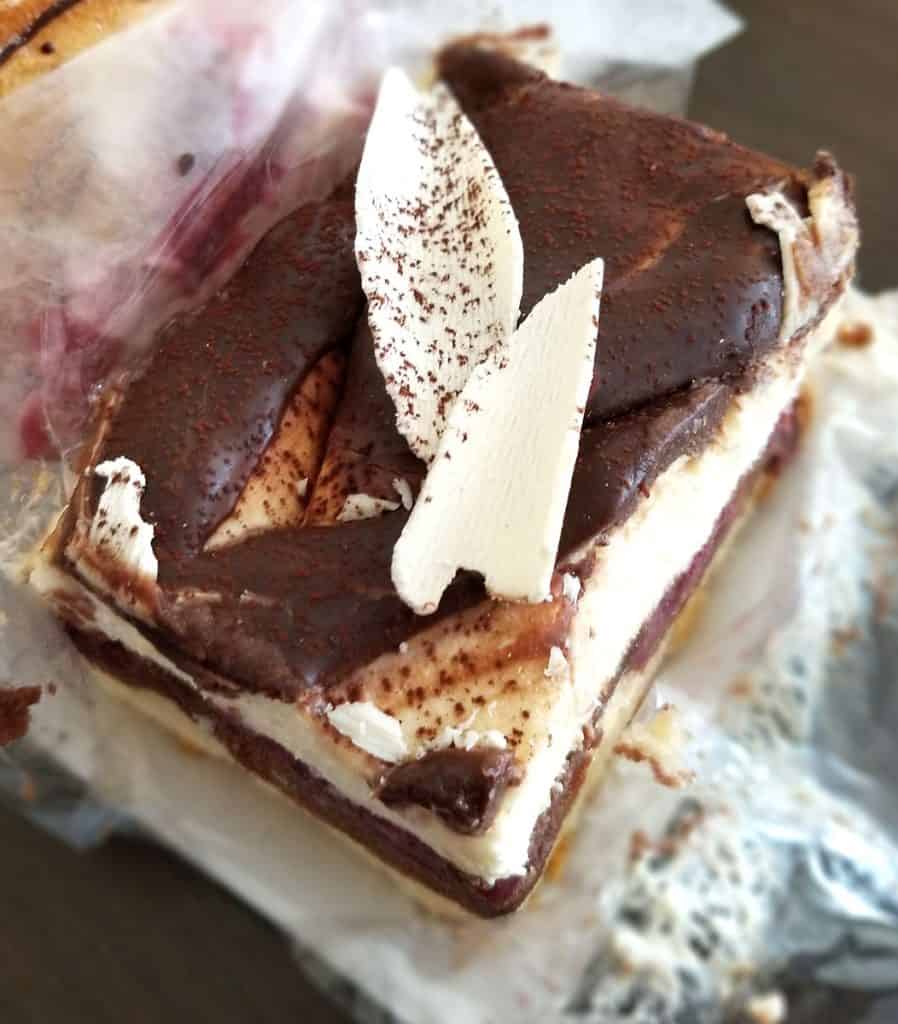 (Okay if you really need a hint and you like chocolate and cherries, try the Donauwelle – named after the waves of the Donau, a major river that runs through Bavaria. See a picture above)

Is there such a thing as breakfast dessert? These would be it! Krapfen is the name used in Munich for Berliners, though JFK-made-internationally-famous, delicious jelly filled powdered donuts that remind you of being a kid again and leave you wondering how the powdered sugar managed to get everywhere.  Somehow they manage to taste so much better in Munich than they do anywhere in the States. They are absolutely lovely, and best if you get them fresh from the bakery in the morning. 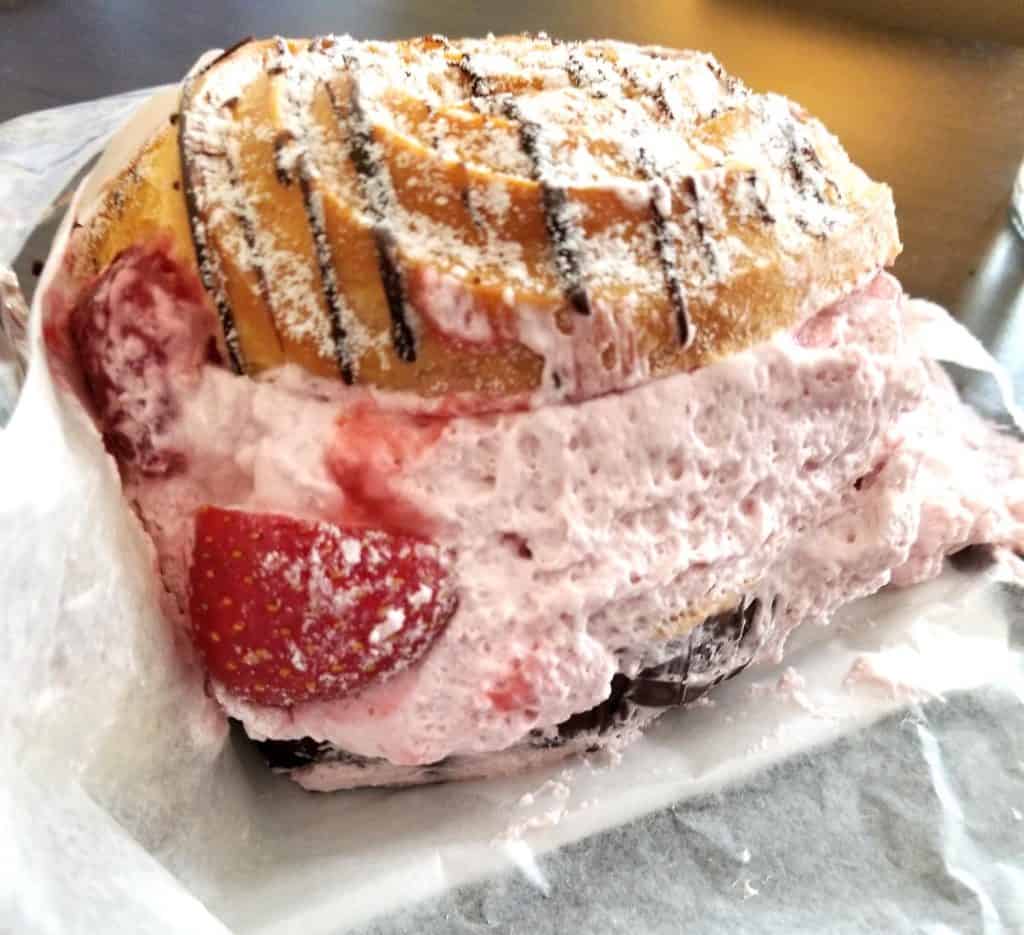 So many windbeutel, so little time. The delicious German version of cream puffs are enormous cream filled pastries that you have to try at least once. They come in all kinds of flavors, plain, strawberry, raspberry, dipped in chocolate sauce. Just know that you might want to eat them every day.

Pop into almost any grocery store or quick stop in Munich and you will find a wide array of gummy bears in an even wider array of flavors and colors. They have everything from licorice flavored to milk flavored to yogurt to tropical fruit. I snickered a little when I was sitting in the hotel lobby one day and overheard a guy saying that his wife had given him very specific instructions on which gummies he needed to bring back. I can relate as I have my favorites that I’ve loved since childhood and pick up everytime I visit. (I found the best selection at the Edeka grocery stores.)

BAVARIAN FOOD TO EAT IN THE SPRING 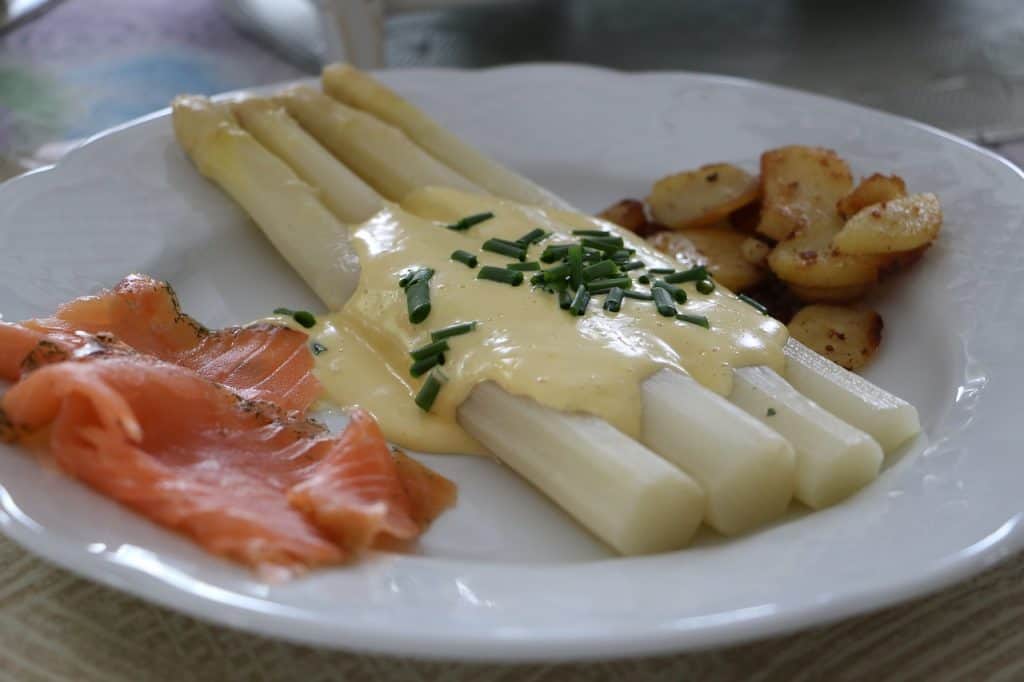 If you visit Munich in the spring, there will be no shortage of white asparagus dishes everywhere you go. Bavarians love it – as a side dish, in a soup, in a casserole – you name it. It’s so beloved I’ve even heard Bavarians bragging about working close to one of the best farms which let them get the freshest asparagus to take home each night! Much more mild than it’s green sibling, white asparagus is incredibly tender and perfect with a side of Schnitzel and roasted potatoes! I’ve had it with a hollandaise style sauce and found it delicious.

Bavarians love their rhubarb in the spring almost as much as they love asparagus. Okay, who am I kidding, nothing comes close to their love of white asparagus but they still have a lot of rhubarb treats to try! Rhubarb bread, rhubarb cake and strawberry rhubarb meringues are all worth a taste test. If you’ve never tried the sour yet sweet taste of rhubarb, now is your chance!

BAVARIAN FOOD TO ENJOY IN THE WINTER 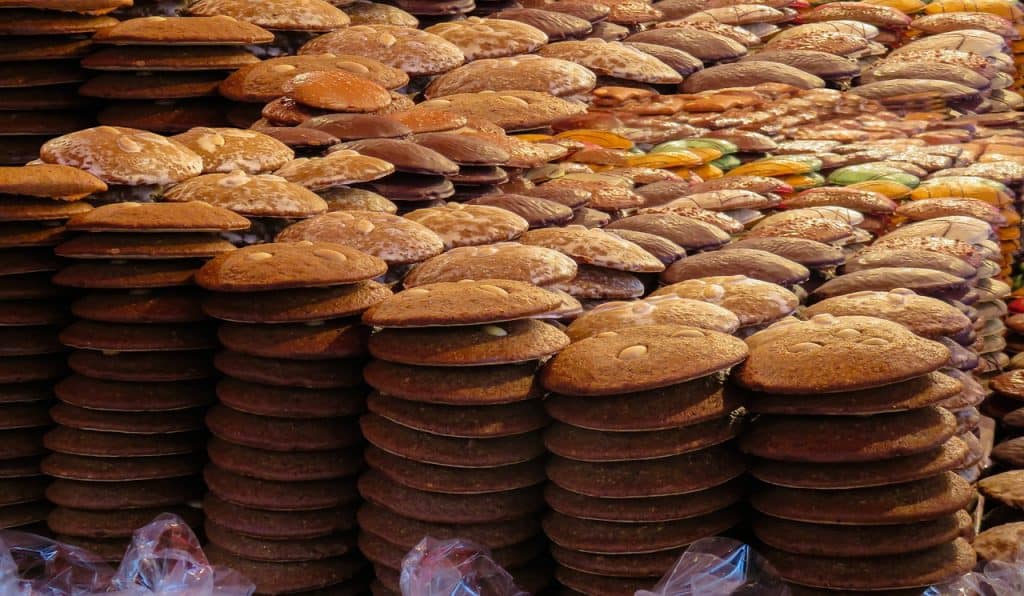 A traditional German food, the most famous lebkuchen actually comes from Nuremberg, a city north of Munich. However, lebkuchen is also wildly popular in Munich and you can find many of the same varities in the city year round but especially between Oktoberfest and Christmas. They also make great Christmas gifts and souvenirs as they frequently come wrapped up in elaborately decorated tins that feature beautiful Bavarian scenery (and if you forget, Schmidt’s let’s you buy them online).

Gluhwein is enjoyed many places outside of Munich and Bavaria, but it’s also a staple at the Munich Chriskindlmarkt. A type of mulled wine, you can enjoy a hot cup out in the cold weather. It’ll warm you up enough to keep you going for the rest of your Christmas shopping!

If wine isn’t your thing, you can also opt for the non-alcoholic kinderpunsch. A mulled cider that’s every bit as delicious as it’s alcoholic counterpart.

Did I miss any of your favorites? Let me know in the comments.

Best Things to Do in Dresden Germany