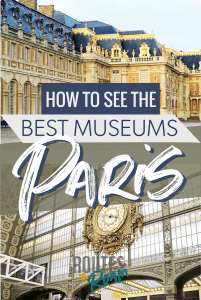 From the Palace of Versailles during the reign of the Sun King, to the French Revolution, to Napoleon, and through two World Wars, Paris has been at the center of history in Europe.  Today, it’s an epicenter of museums featuring some of the best art, history and natural history collections in the world. It’s easy to get lost in the sheer number of them, and if you can – you should. But for most of us, traveling to Paris is part of a far too brief trip.  So here are a few museums that stand out among the rest.

Not only is the Louvre one of the best museums in Paris, it’s one of the best in the world. Originally a private collection, the Louvre and its contents were given over to the public during the French Revolution. Ever since it’s been wildly popular with tourists, and a bucket list item for many.  It’s most famous painting, the Mona Lisa, is often surrounded by throngs of people dying to get a peek in person at da Vinci’s work.

A former railway station, the Musee D’Orsay houses an impressive collection of impressionist and post-Impressionest art with works by Money, Manet, Degas, Gaugin and others. Focusing primarily on art from 1848 to 1914, the museum holds a number of famous masterpieces including Van Gogh’s “Self Portrait”  and James Abbott McNeill Whistler’s “Whistler’s Mother”. The railway station that houses the museum is a work of art on its own, originally built for the Universal Exhibition in 1900.

Offbeat and whimical, the Centre Georges Pompidou houses several cultural institutions under one roof including the Public Information Llibrary, The Musee National d’Art Moderne and the IRCAM. In addition to its permanent collection, the Modern Art Museum frequently has a variety of temporary exhibitions that feature artist’s works as well as their methods.

The army museum houses a large collection of military history and art. It covers the 13th century through World War II and beyond. The museum gives visitors a chronological and comprehensive tour of French military history. One of the centerpieces of the museum? The tomb of Napoleon Bonaparte in the Dôme des Invalides.

Like the Louvre, the natural history museum’s public founding was during the French Revolution, and evolved through the 19th and 20th centuries as new collections were added. The museum currently has 12 sites throughout France and is an education and research facility as well as a museum. Some of its most famous sites are the Gallery of Evolution and the Museum of Mankind, both located in Paris.
Visitor Info:

The Rodin museum dedicated to the French sculptor Auguste Rodin contains over 6,000 sculptures and thousands more drawings and photographs. His most famous work, “The Thinker”, is also on display here. The museum gives visitors a tour of his life’s work as well as to his background as a sculptor and artist.

Once an ornate palace established by Louis XIV when he modified his father’s hunting lodge into the center of French government in 1682, Versailles now stands as a monument and museum of French history. Here you can visit the Hall of Mirrors, the Royal Opera House and Marie-Antoinette’s private chambers. A series of ongoing temporary exhibits delves deeper into everyday life at Versailles, famous visitors and the leaders of French history.
Tags: Europe, History, History & Culture, Museums

11 Best Cities in France (You Need to Visit)